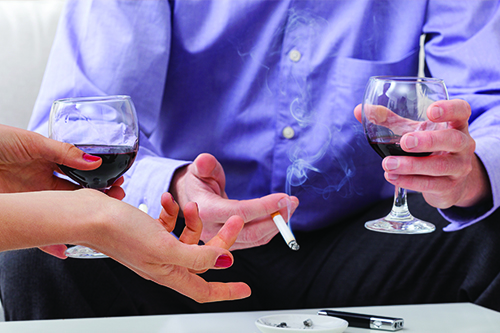 New research shows that people who drink alcohol or men who smoke are more likely to suffer a failed dental filling. Research also found that a genetic difference in some patients is associated with increased filling failure rates. The study, published in Frontiers in Medicine, also shows no major difference in filling failure rates between traditional amalgam and newer composite resin fillings. The results suggest that genetic analysis might help dentists to personalise treatments for their patients, which could lead to improved outcomes.

Fillings can fail for a variety of reasons, including re-emergence of the initial tooth decay or the filling becoming detached. The jury has been out on whether newer composite resin fillings are as durable as traditional amalgam fillings, which have been in use for more than 150 years but contain mercury, a toxic metal.

To investigate this, researchers accessed a large repository of dental records. They found that overall, there were no major differences between patients receiving amalgam or composite fillings in terms of filling failure rates. This suggests that composite fillings are at least as durable as amalgam fillings.

The repository also contained information about patient lifestyles, including smoking and drinking habits, and a DNA sample from each patient – allowing the team to investigate whether patient lifestyle and genetic factors could affect failure rate.

They found that within two years of the procedure, fillings failed more often in patients who drank alcohol, and the overall filling failure rate was higher in men who smoked. Furthermore, a difference in the gene for matrix metalloproteinase (MMP2), an enzyme found in teeth, was linked to increased filling failure.