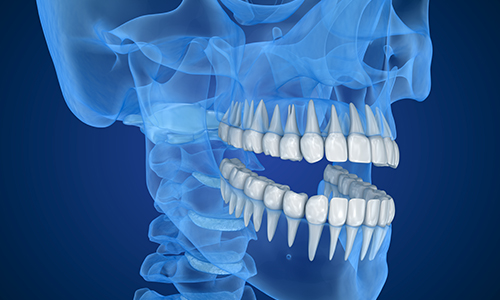 Research conducted by the University of Sydney, Australia has found chewing and biting to be the cause of adult teeth breaking through the gums rather than an innate, unknown force. The researchers used CT-scan images of an eight-year-old child’s mandible to design a 3-D model that was used to observe the forces produced by the jaw when biting and chewing. The aim of the research was to show the stress dispersion within the jaw as a person bites and chews.

Dr Babak Sarrafpour, an oral and maxillofacial pathologist and dentist at the University of Sydney said: “We designed the hard and soft tissues in the jaw and input the data we had about jaw movements into the software. We simulated both the back teeth and front teeth chewing and we could assess the stress on the teeth, bone and soft tissue”.

The multidisciplinary team at the University found that the chewing and biting actions of the jaw deform the thin layer of soft tissue surrounding the teeth that are yet to appear, which forces them outwards.

Sarrafpour explained: “Perhaps soft tissue dental follicle around unerupted adult teeth acts as a mechanosensor in response to biting forces and remodels the surrounding bone in a way that carries the tooth to the mouth”.

The team believes that this study could result in further preventive treatments that could change the tooth angle before it erupts, rather than depending on techniques such as orthodontic bands or braces to realign the tooth later in life.