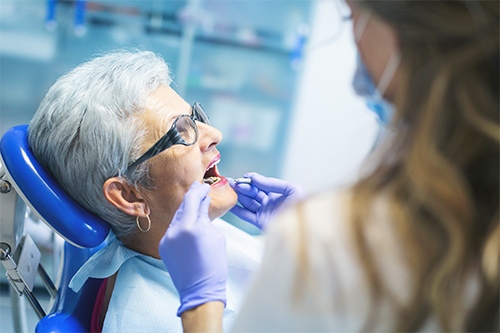 Postmenopausal women who have a history of gum disease also have a higher risk of cancer, according to a new study of more than 65,000 women. The study, led by researchers at the University at Buffalo, focused specifically on older women. It’s also the first study to find an association between periodontal disease and gallbladder cancer risk in women and men. The findings were published in the journal Cancer Epidemiology, Biomarkers & Prevention. Jean Wactawski-Wende, the study’s senior author said: “Our study was sufficiently large and detailed enough to examine not just overall risk of cancer among older women with periodontal disease, but also to provide useful information on a number of cancer-specific sites”.

The average age of the participants was 68, and most were non-Hispanic white women. As part of a follow-up health questionnaire, participants were asked: “Has a dentist or dental hygienist ever told you that you had periodontal or gum disease”? Women who reported a history of gum disease had a 14% increased risk of overall cancer. Of the 7,149 cancers that occurred in the study participants, the majority were breast cancer. “There is increasing evidence that periodontal disease may be linked to an increased cancer risk and this association warrants further investigation,” said the paper’s first author, Ngozi Nwizu, who worked on the research. The risk associated with periodontal disease was highest for oesophageal cancer, the researchers reported. Gallbladder cancer risk was also high in women who reported a history of gum disease.