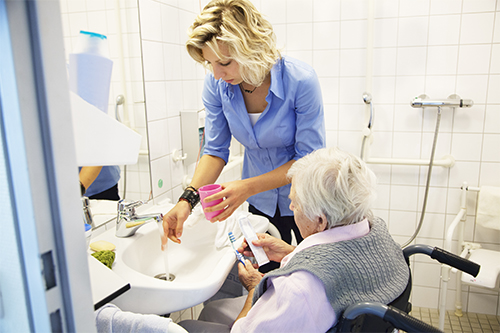 Nearly 90% of patients at long-term care facilities in the US don’t take advantage of dental services, even when they’re free, according to research from the University of Buffalo. The research also found that the longer patients stayed at a nursing home or assisted living facility, the more likely they were to use dental services. But even among those patients who had stayed at the facility for years, only 55% used the services.

The study examined the dental and medical records of more than 2,500 residents at the Brothers of Mercy Nursing and Rehabilitation Center in Clarence, NY, who were discharged between 2008 and 2012. Among the group, only 10% received a dental exam at least once during their stay.

Age also was a factor, as patients aged 76 years and older were twice as likely to use dental services as younger residents. Patients with endocrine, nutritional, metabolic, immunity, mental, and circulatory system disorders and diseases were more likely to receive dental services as well.

Researchers suggest that medical treatment took priority over dental services for patients who stayed less than a month, often for short-term rehabilitation. These patients were also likely to have their own dentists outside of the facility.

Researchers said that improving this attitude toward dental care might lie in connecting oral health with overall health and quality of life.