E-cig ‘just as harmful as tobacco’ for oral health 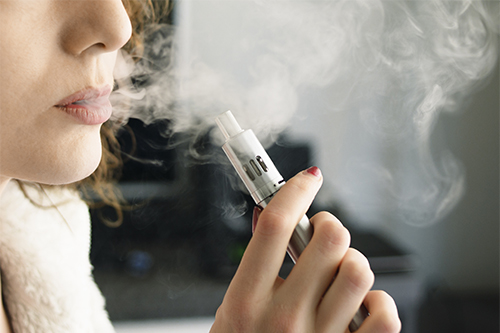 Electronic cigarettes are often marketed as a safer alternative to conventional cigarettes. When it comes to oral health, however, new research suggests that vaping may be just as harmful as smoking.

In a study published in the journal Oncotarget, researchers found that the chemicals present in e-cigarette vapour were equally as damaging – in some cases, more damaging – to mouth cells as tobacco smoke. Such damage can lead to an array of oral health problems, including gum disease, tooth loss and mouth cancer.

E-cigarettes are battery-operated devices containing a heating device and a cartridge that holds a liquid solution. The heating device vaporises the liquid – usually when the user ‘puffs’ on the device – and the resulting vapour is inhaled.

While e-cigarette liquids do not contain tobacco, they do contain nicotine and other chemicals, including flavouring agents.

E-cigarettes are considered by many to be safer than conventional smoking, but because the devices are relatively new to the market, little is known about the long-term effects of vaping on health.

To address this gap in research, the team exposed the gum tissue of non-smokers to either tobacco- or menthol-flavoured e-cigarette vapour.

The researchers found that all e-cigarette vapour caused damage to gum tissue cells comparable to that caused by exposure to tobacco smoke.

The researchers noted that nicotine is a known contributor to gum disease, but e-cigarette flavouring appeared to exacerbate the cell damage caused by e-cigarette vapour, with menthol-flavored vapour posing the most harm.

While further research is needed to investigate the long-term effects of e-cigarette use, the researchers believe their findings indicate that the devices may have negative implications for oral health.

1,921 comments on “E-cig ‘just as harmful as tobacco’ for oral health”